If you are a smoker, you already know it is bad for your health and your wallet. But when you think about stopping smoking, you believe it’s going to be difficult, a real struggle.

To be fair, we’ve all been told for decades that it is hard, that you’ll put on weight, that you’ll be miserable, that you are likely to fail anyway. It’s as if someone doesn’t want us to stop smoking… Just look at the language used: QUIT smoking, GIVE UP smoking. “You’re not a quitter now, are you?” 🤔

What if instead you could just STOP smoking, and regain control of your health and your finances? What if you could gain more energy and have a better quality of life?

No matter how long and how much you’ve smoked, now is always a good time to stop and let your body recover. It’s never too late. Using hypnosis techniques, I can help make this process easier.

Here is what happens once you’ve decided to get your health back, free from tobacco:

20 minutes
Your blood pressure and pulse will start to return to more normal levels. Your lungs being free from the smoke exposure can start to clear themselves.

8 hours
Carbon monoxide levels will return to a more normal level. Carbon monoxide replaces oxygen particles in the blood, lowering the amount of oxygen in your blood. This forces you heart to work harder to oxygenate your body.
When carbon monoxide goes away, your oxygen levels increase, helping nourish tissues more efficiently.

24 hours
You’re starting to decrease your risk of heart attack by reducing constriction of veins and arteries as well as increased oxygen levels that go to the heart to boost its functioning.

Nicotine levels in your bloodstream are now negligible.

48 hours
Previously damaged nerve endings in your mouth and nose start to regrow. Your sense of taste and smell start to improve.

72 hours
You start to breath more easily as the bronchial tubes inside the lungs have started to relax and open up more. This makes air exchange between carbon dioxide and oxygen easier, and your lung capacity increases.

One week
Ex-smokers who successfully make it one week free from tobacco are nine times as likely to remain non-smokers in the long term!

Two weeks
By now, you are not only breathing easier, you’re also walking easier. This is thanks to improved circulation and oxygenation. Your lung function also increases as much as 30 percent.

One month
In just one month, you notice many health changes. You have heightened overall energy levels. You may also notice that many issues, such as sinus congestion and shortness of breath are starting to disappear. Fibres in your lungs that help keep them healthy are growing back, reducing excess mucus build-up and protect against bacterial infections.

Three months
A woman can improve her fertility as well as reduce the risk that her baby will be born prematurely.

Six months
After six months of being a non-smoker, people often notice they’re better able to handle stress without feeling like they need to smoke. The smoker’s cough is also greatly reduced or even gone as the lungs are not constantly irritated by tobacco smoke anymore.

One year
Your lungs’ health have dramatically improved in terms of capacity and functioning. Plus, you have saved a significant amount of money!

Three years
Your risk of a heart attack has decreased to that of someone who never smoked.

Five years
Your risk of death from lung cancer has halved.

10 years
Your risk of dying due to lung cancer has decreased to that of someone who never smoked. All the damaged cells that were previously precancerous have been replaced with healthy cells.
You have also greatly reduced the risk of other cancers: mouth, oesophagus, bladder, pancreas, kidney,…

15 years
Your risk for heart attack and stroke has decreased to equal that of someone who’s never smoked before. 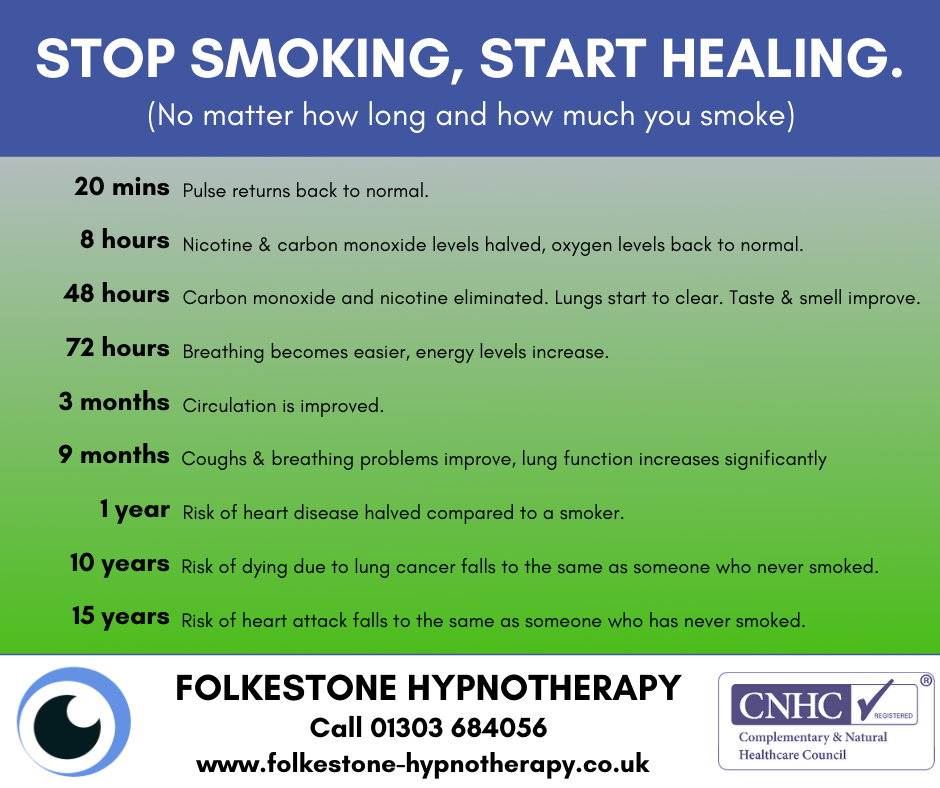 3 simple techniques to deal with anxiety or panic attacks

Anxiety and panic attacks are horrible and very unpleasant. They are two distinct phenomena, but they have a lot in common. They have strong physical and mental symptoms, and they can affect your life very strongly. Read more… Phobias are a very common issue that many people suffer from. Here is a quick discussion about what phobias are and why hypnosis can help getting rid of them rapidly.